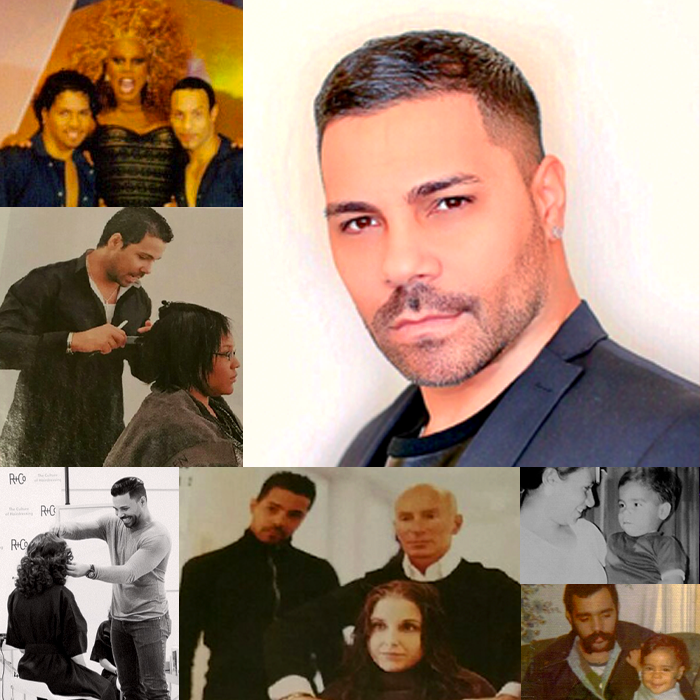 Born and raised in New York City, R+Co Global Educator Robert Vasquez had stars in his eyes as a young Puerto Rican teen, and moved to Los Angeles to pursue a dance career. Over the next 12 years, he thrived as a backup dancer, touring with such R&B legends as En Vogue and Toni Braxton—but he was ready for his next chapter: hairstylist to women as glamorous as those for whom he danced. To celebrate Hispanic Heritage Month, we chat with Vasquez about his Latin roots, how he got his start in hair and how his heritage informs his hairstyling.

What does it mean to be Latino to you?

RV: Having a strong sense of pride.

How does your heritage inspire this pride?

RV: My family is Puerto Rican. I was raised very strongly in that culture and way of life. I was always taught to be very proud of who I was—where my ancestry comes from.

Who in your life taught you take pride in your heritage?

RV: My mom and dad, of course, but I think my grandparents reinforced it because they were the ones born in Puerto Rico. Especially my grandmothers; they nurtured me. Growing up in a Latin household, it helps to have female role models. The dads and grandpas teach you to be strong, whereas the grandmothers and the mothers teach you everything else that you need to survive life.

How did you get your start as a hairstylist?

RV: After wrapping up being a professional dancer, I decided to relocate back to New York in 2003; I wanted to start fresh and live in a place where nobody knew me professionally as “Robert the Dancer” anymore. I had become aware of Garren’s work when I was a dancer, just seeing all the stuff he used to do with the supermodels and fashion magazines—I knew I really wanted to work for him. So I moved back to New York, enrolled in beauty school and, literally the day my license showed up in the mail, I applied to work at Garren New York salon. And here I am, 18 years later, still working for the man!

How does your Latin heritage inform your work as a hairstylist?

RV: I really understand textured hair. I dealt with a lot of family members who had that thick, curly and sometimes coarse Puerto Rican hair that I groomed into submission. What I realized was after I left my Latin bubble, a lot of other people have that type of hair; it wasn't just the Latin community. In New York, I interacted with a huge portion of the Jewish community that has a very similar hair texture. In my last audition interview to work for Garren and Thom [Priano], I took a Spanish girl as my model because I wanted them to see what I could bring to their salon.

Are there any Latinos who you look to as hair icons?

RV: I would have to say Oribé. He did the type of hair that I love—big and glamorous—and to see somebody of Latin heritage being able to do the things that I was dreaming of doing was so amazing—especially because he was so relevant to my generation. He also styled some of the most amazing celebrities, Jennifer Lopez. And, not to mention, he was trained under Garren as well. So to me, it all fell in line; no one had to explain to me why I admired his work because I saw where he got his start.

Fun question: Is it true you were a Power Ranger?

RV: Yeah! Back in 1993 I auditioned for it—we had no idea what it was going to be. The show hired a bunch of dancers and gymnasts to [be the lead actors’ stunt stand-ins] because they figured it would be easier to teach us the choreographed fight scenes. I did it for two-and-a-half years, and then toured all over the world with the show as well. At the time, we had the most sold-out shows at Radio City Music Hall!

Sign up for our newsletter for the latest news, offers and style tips delivered to your inbox.

By submitting this form, you agree to receive recurring automated promotional and personalized marketing text messages (e.g. cart reminders) from R+Co at the cell number used when signing up. Consent is not a condition of any purchase. Reply HELP for help and STOP to cancel. Msg frequency varies. Msg & data rates may apply. View Terms & Privacy.

You have no items in your cart.